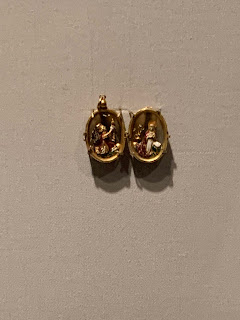 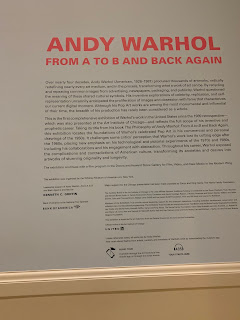 I had a quick, less than 48 hrs in Chicago a few weeks ago for a work session.  I may have done my best to make sure that when I was in town I could head to the Art Institute of Chicago  with the sole purpose of going to the Warhol exhibit.  I saw that I had just missed it in NYC and was excited to see that it was in Chicago!  If I had not been able to make it on a work trip, I probably would be trying to squeeze in a weekend trip!   I walked there directly after work and checked in my bags.  I did wait about 20 minutes in line to get my tickets.  Once I had my tickets, I bee-lined directly to the exhibit, which was in the back of the museum to the right.  The exhibit, Andy Warhol -- From A to B and Back Again , was the first time in decades a single focused exhibit has been done on Warhol .  Honestly, I did not know much about him.   The entrance to the exhibit shows some of the vast collection of portraits that he did.  It set the stage for the rest of the exhibit. The
Post a Comment
Location: 111 S Michigan Ave, Chicago, IL 60603, USA
Read more 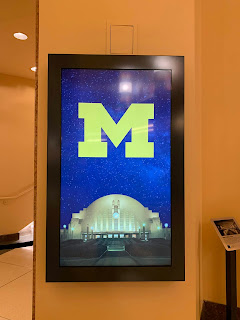 A few weeks ago Jason and I attended a Night at the Museum at the Cincinnati Museum Center with the University of Michigan Alumni Association.   We had not been to the museum since it had been finished, so we were very excited about this invite.   The museum had been under construction since we moved to Cincinnati, but did finish about a year ago.   It was an extensive renovation – from what we understand costing significant dollars and was over two years.   They restored fundamentals in the building and also revamped also the exhibits.    They even uncovered additional space that could be utilized for additional exhibit capacity. U of M had brought in three different sets of faculty to provide short lectures in three of the key areas within the museum.    To start, we headed to the Dinosaur Hall to learn about fossils that had been found near the Licking River in the early 1700s.  The professor brought up a set of bones that had been found and brought to the King o
Post a Comment
Location: 1301 Western Ave, Cincinnati, OH 45203, USA
Read more 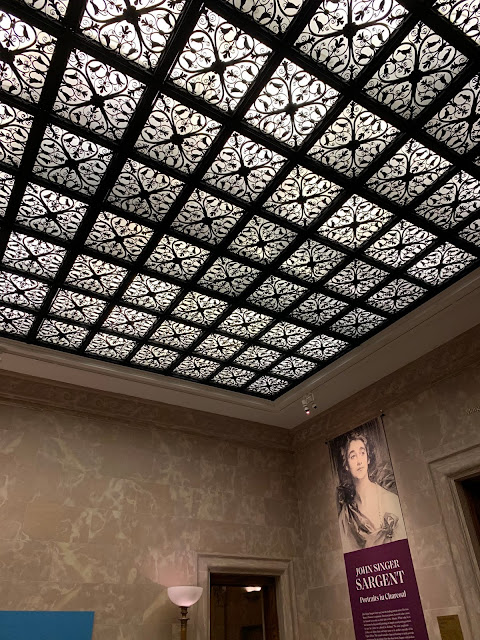 I was in a suburb of New York City two weeks ago and had to get to the Morgan Library .  It has been a number of years since I have been able to make it there and it is probably my favorite place in New York.  This aptly was visit #10! It is peaceful and full of light in the museum.  It was busy in there, but still quiet.  I continue to love how elegantly the museum meshed contemporary with the traditional elements. Not sure if you can see it, but the grates are full of birds I focused on my visit on three major exhibits: John Singer Sargent: Portraits in Charcoal , Verdi: Creating Otello and Falstaff-Highlights from the Ricordi Archives , and the main library wing . I really like the John Singer Sargent oil painting portraits.  He is quite well known for these paintings that he completed in the early portion of the 1900s including many of the souls and their children.  He painted so many famous people of that time period.  He ended up switching to charcoal because it was f
Post a Comment
Read more 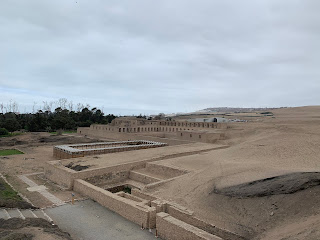 Over Labor Day, I headed to Lima, Peru to visit my sister, her husband, my nephew and my niece.  My niece and nephew had the day off school, so we headed south of the city to check out Pachacamac .  It was about an hour south of the city although we hit traffic so it usually would be a little shorter.  The site is just off the Pacific Ocean.     The site is named after the "earth god" Pacha Makaq, which is a god we heard a lot about when we were in the Sacred Valley.  It was started before the Incan period, but they continued to operate throughout the Incan empire.  It continued as both a temple and an administrative center.    The ruins were first discovered in the 1890s.   The museum was re-done about three years ago.  Excellently, I might add.   We headed out to the ruins first, but I think you might want to check out the museum first.  I may also feel like that because our tour guide spoke Spanish and while I understood some of it, I am sure I did not catch it all
Post a Comment
Read more
More posts