Showing posts from April, 2010
Show all

By Katie Tamarelli - April 25, 2010
i went to the cloisters a few weeks ago with my friend from school. it was a beautiful day. the flowers were starting to peek up...

the cloisters were a great trip...as usual! 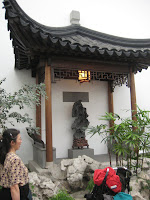 100th blog entry. i knew this would have to be one heck of a museum. so i decided to go with a classic, the met. this is the museum i have been to the most (by far) over the last 3 years. it just seemed fitting for the 100th entry on my blog. (the picture is of the shrine on the 2nd floor of the met!)

i went without a particular exhibit or area in mind. i just sort of wandered...and i ended up wandering into a wing i had never been to before!

i wandered into the tutankhamun's funeral. this had different artifacts from his burial site although none of the real show stopper pieces. i loved the displays of the floral collars that some of the royalty was wearing. those were quite beautiful and unusual.

i then walked into the exhibits which were upstairs from the egyptian exhibits. i am not quite sure how i had never ended up there before. it landed me right near the exhibit, five thousand years of japanese art: treasures from the packard collection. this exhibit was magnifice…
Post a Comment
Read more

By Katie Tamarelli - April 04, 2010
to take advantage of the beautiful day in new york city, i thought i would try to take the lower east side tenement museum walking tour. i hustled down there and got there right in the nick of time.

i have been to the lower east side museum for their tenement tours, but wanted to try this 1 1/2 hr walking tour, immigrant soles: a neighborhood walking tour. i saw some areas of the lower east side which i had never seen before. the tour guide was very good; he did a great job pointing out the interesting architecture making us think about what certain architecture features might mean. for example, a building with only three windows, what does that mean? answer: that it was meant to have a single family live there as opposed to twenty, since there was no partition splitting the building in two. he also brought up some of the different political tensions running through the LES that had not been mentioned in some of the other tours.

perfect for a beautiful summer day.

By Katie Tamarelli - April 03, 2010
i went to the jewish museum on a mission to see one thing: a small money named george.

the exhibit, curious george saves the day: the art of margret and h.a. rey, was on the second floor, which is a different location than the other special exhibits i have seen at the museum. the layout was done chronologically throughout their life, starting in about 1938 through the rest of their life.

the exhibit was a mixture of letters, illustrations, pictures and their custom holiday cards! i wish i could find some photographs of these holiday cards. they were fantastic! they were probably my favorite surprise in the exhibit. they also had illustrations from curious george goes to the hospital, which a favorite growing up. another interesting factoid from exhibit, curious george is not an actual species of monkey. who knew?

note: the museum is always free on saturdays, but unfortunately, the gift shop is closed on saturdays.

By Katie Tamarelli - April 03, 2010
i went to the brooklyn museum of art yesterday after a failed attempt last weekend. we had the day off from work, but the subways were still running normally!

i went out to see one exhibit, to live forever: art and the afterlife in ancient egypt. i expected the exhibit to just focus on that, but it actually was primarily focusing on contrasting the upper, middle and lower class funerals.

the exhibit was made up of 2 small rooms and 1 larger room. as i have found is typical of brooklyn museum exhibits, i was not sure if i went through the exhibit in the right order. i ended up going through all three rooms in clockwise orders circling back and finishing at the beginning.

the exhibit was primarily contrasting the three classes. typically, the lower class would try to replicate the upper class funerals by either reducing the number of items (like food given to the dead, toys, fake servants), replacing more expensive materials with cheaper ones or changing the location of the funeral fr…
Post a Comment
Read more
More posts