By Katie Tamarelli - August 11, 2019
Our last visit in Sintra was to the Quinta da Regaleira.  This was outside of the park system that the Mouros and Pena were a part of.  It is though considered part of the UNESCO heritage site.

Parking here proved to be the most challenging aspect of this visit.  There was a small parking lot close to the entrance that was full – otherwise, it was one way streets with very limited street parking.  We had to do a loop twice to end up finding a spot – and had a bit of walk to the entrance (which was fine).  We bought tickets to this when we arrived around 1 pm.  I think we looked to buy tickets in advance, but could not find how to do it.  The gardens were busy, but definitely not over-crowded.  We were able to get tickets right away.

Then into the gardens to try to figure out where to go first.  I do wish they had given more of a path or guided route.  The signage was not great, so it was hard to make sure we hit the high notes. 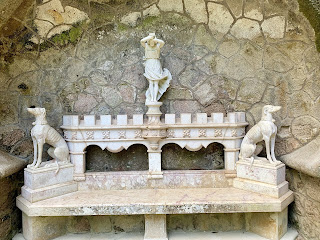 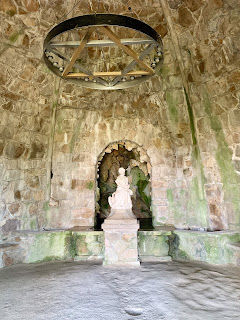 The gardens/land invoke gothic, Roman, Renaissance styles.  It somewhat reminded me of some of the Japanese gardens we have seen, not that they were similar in style at all, BUT the Japanese gardens emphasize that every time you turn a corner, you get a new view.  This  garden had those elements.  It felt a little disorganized, but somehow all fit together.  Per Wikipedia, “the woods are neatly arranged in the lower parts of the estate, but are left wild and disorganized in the upper parts, reflecting Moneiro’s belief in primitivism.”  So, seems like I am not the only one with that impression. 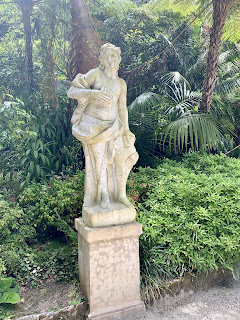 We spent most of our time walking through the gardens with no  time spent in the palace and chapel.  The Initiation Well was really cool.  They were never used for actually storing water, but had some ceremonial rituals occur in them.  They were rather beautiful and you could tell were very thoughtfully designed.  Based on our reading, they were likely linked to Tarot mysticism!  From the bottom of the well, it flowed directly into another part of the estate (which is why I wished there had been more of a guided path – you sometimes popped out in places that you did not expect). 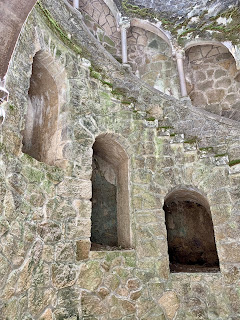 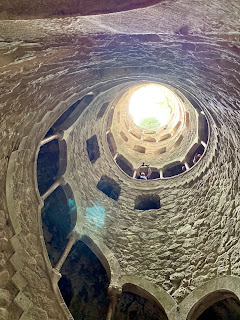 We ended up getting lunch here, two sandwiches and some chips.  It was surprisingly quick and delicious.  it might have also been delicious because we were starving.  I should have gotten a second sandwich.

I wish we had more time to fully explore this.  I think it was enchanting and mystical.

Popular posts from this blog 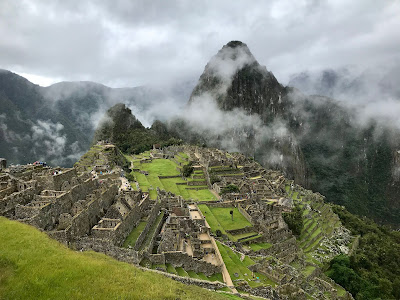 It's hard to know where to even start with Machu Picchu.  My sister lives in Lima, Peru, so it was definitely about time to get to Machu Picchu.


I scoured the web pages and honestly, it seemed difficult to get there for under $350 USD per person.  Perhaps as a visitor I was seeing the tourist prices, but I had a hard time seeing how to do this "on our own" for less.  For example, the ticket to MP is ~$45 USD, the bus ticket up and back from Aguas Calientes was ~$30 USD (x2) each way and the train each way was ~$120 USD (x2).  The bus company has a virtual monopoly and the hike really didn't seem worth it.  It is not a pretty hike, it is fairly steep and there is altitude (although not as high as Cusco).

We ended up booking a package through our hotel using their preferred travel agent, Venturia.  Honestly, we were not very impressed with them.  The initial few itineraries only left us two hrs at Machu Picchu.  That seemed rather besides the point.  I ended up suggest…
Read more 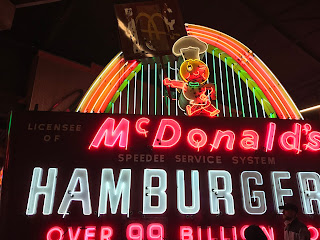 After lunch, we headed to the American Sign Museum.  I had never been and I had heard good things.  The museum is over on the west side in the industrial area of town.  We have not been over there much.

We used our ArtsWave pass to get a "buy one, get one" tickets.  The museum is rather expensive.  It was $15 per ticket, which is more expensive than the Art Museum and just about as expensive as the Zoo.  It doesn't necessarily have the legacy of either of those institutions.

We arrived around 2:30 and caught the last 30 minutes of the tour.  I do recommend trying to catch a tour.  Ironically the museum does not have great signage -- or at least, it has a lot of it.  That being said, it has a lot of individually labeling, but I liked the tour highlighted the key elements of the museum and tied it together.  The tour highlighted the macro trends in signage (who knew such a thing existed).  And given my reaction of "who knew such a thing existed" highlights the im…
Read more 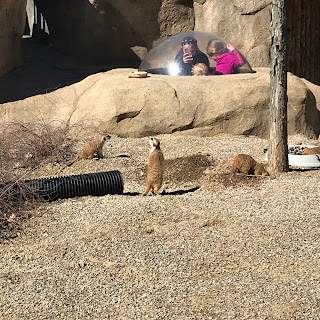 A few weeks ago, I finally went to the Cincinnati Zoo!  It was one of the first nice, non-rainy Saturdays in Cincinnati, so the entire city showed up at the zoo.  My sister-in-law and almost two-year-old nephew were here, so it just seemed like destiny.

Unclear if we parked in a zoo lot, but our car was there when we got back, so that's good!

We got there about 2.5 hrs before it closed, but there was still a line to get in.

I feel like we did end up covering most of the zoo.  I was a little surprised at how tight the zoo really was.  I guess after the Detroit Zoo with its vast acreage, anything seems small.  Some of the areas though seemed so small for some of the animals.  A number of the animals also did not appear to be out yet...hard to tell if it was still too cold or what it was.  Most of the big cats were not for example.

That being said, we really liked the giraffe exhibit.  We really liked how they put the feeding posts near the visitors, so you got a great view of the gi…
Read more